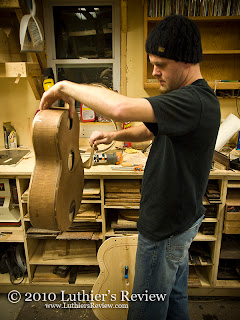 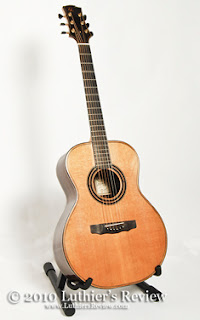 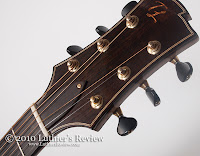 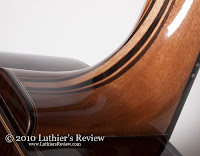 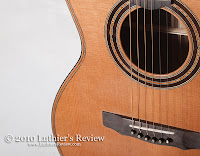 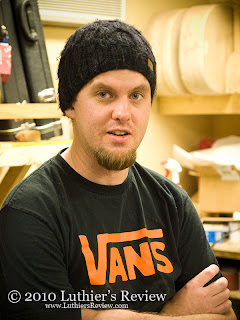 Name: Todd Lunneborg
Location: Andover, MN
Years in Business: 7 years as TLGuitars, 20 years as a repair and tour tech.
Specialty: Acoustics and Electrics.
Artists that play your instruments: Bon Iver, Michael Gulezian, Smilin' Liar, Throw the Fight, Love-Cars, Halloween, Alaska, Bill Mike Band, Haley Bonar, and Nomia.
Luthier Influences: James Olson Guitars, Jerzy Drozd Basses, William "Grit" Laskin Guitars, Carl Thompson Basses, Bryan Galloup Guitars, Fender, Martin, PRS, Gibson, Charlie Hoffman Guitars, Matt Artinger Guitars, Michael Tobias Basses, Jeff Traugott Guitars and Linda Mazer Guitars.
Philosophy of Building:
Tradition is a huge part of my guitar building process.  Honoring and following the Minnesota tradition of building great acoustic guitars has been the end goal for me ever since I decided to start making guitars. Those makers are my inspiration, my starting point, and the epitome of what I think a great acoustic can be.
My electrics focus on the shapes and custom instruments I love; guitars with progressively designed shapes and build techniques with hand carved tops, neck through lines, and perfect ergonomically balanced bodies.
Biography:
Blending what he considers to be the best aspects of traditional custom guitar building with a progressive and multi-influenced design approach Todd Lunneborg is finally building instruments that match it the pictures he sees in his head.  Being a guitar maker in Minnesota sets the bar high and it is the best source of inspiration, education, and hand-me-down tools for this fingerstyle guitarist/ guitar tech/ guitar teacher turned guitar maker.
His education as a luthier started at the age of 13 as a repair apprentice at a mom and pop music shop in the Alexandria,Minnesota. He has benefited from time spent loitering in all of Minnesota’s custom guitar makers shops.  Todd’s acoustics draw their origins, shapes, and traditions from all of the custom guitar makers in Minnesota and his electrics are a finely cooked, ergonomic blend of his favorite commercially made electric guitars and modern custom bass builders.
Todd has also served as a guitar tech for Bon Iver, Peter Himmelman, Billy McLaughlin, Love-Cars, Happy Apple, Lateduster, Smilin’ Liar, Chris Koza/ Rogue Valley, The Evening Rig, Cowboy Curtis, The Sensational Joint Chiefs, Haley Bonar, Bill Mike Band, Nomia, and Halloween, Alaska.  He studied fingerstyle guitar technique with John Stropes, and has run sound for Taj Mahal, Nada Surf, Loudon Wainwright III, Soul Coughing, The Mighty Mighty Bosstones, Guided by Voices, Left Over Slamon, the Honey Dogs, Mason Jennings, Greg Brown, Atmosphere, John Hiatt, Remy Zero, Shannon McNally, Eyedea and Abilities, Chuck Prophet and Billy Bragg.
He currently builds guitars and teaches guitar building courses out of his Andover, MN shop.  Todd is a regular contributor to the Fretboard Journal.
Website & Contact Info:
www.tlguitars.com
Todd Lunneborg Guitars
4420 158th Avenue NW
Andover, MN 55304
612.991.9360
contact@tlguitars.com
Endorsements, quotes & links to interviews and other media:
http://vimeo.com/16852257
http://www.youtube.com/watch?v=R2kXPk0aeSY
http://www.youtube.com/watch?v=aLjh_3SMoNc
http://www.youtube.com/watch?v=blDv76aSXqg
Posted by john fellman at 9:06 AM 1 comment: