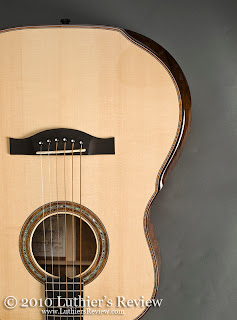 Charlie Hoffman is well known both as a builder and for his world-class repair shop, Hoffman Guitars.  Many of his guitars are fairly conventional, but Charlie has a knack for subtle, beautiful combinations.  Subtlety is one of Charlie's trademarks (in his building anyway).  He cares little for extravagant inlay or anything that qualifies as the boutique guitar world's equivalent of "bling."  What he does care for are guitars built to be played.  He has spent nearly 40 years in this pursuit, and continually builds on the name he has built.  He has made great guitars for years, but they somehow keep getting better and better.  His latest work is easily his best, providing a great balance of presence, volume, tone with subtly unique and modern aesthetics.  The american market for his guitars has taken notice, but are probably still a little underpriced for the quality he's putting out now - and the european market is starting to show some strong interest.  So, whether you are in Brighton, England or in Minneapolis, Minnesota - stop into the best guitar shop you can find and try one out.
This particular guitar is Sapele with Koa accents, and it doesn't just play - it sings.  The tone is a combination of crisp, deep bass and shimmering trebles, and the sustain has a refreshingly even decay.  The body is very comfortable to hold and play - the arm bevel is a very nice touch.  Some older enthusiasts may remember Stu Mossman's guitars.  Charlie learned a great deal from Stu, and it still shows in his work - the same kind of solid build allows for heavier strings without limiting playability.  It really is a joy to play. 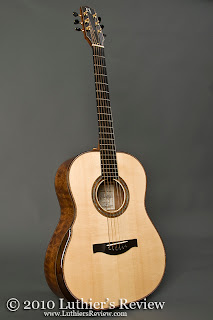 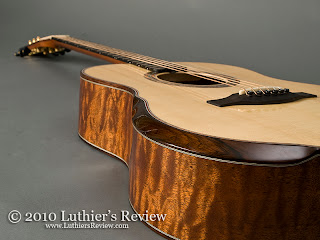 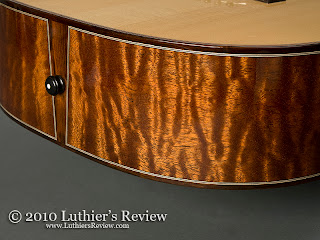 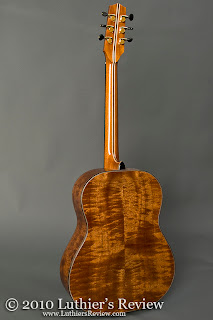 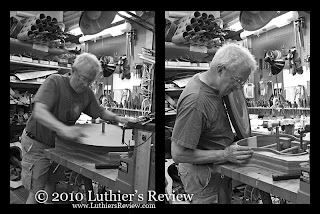 Charlie, Fitting a Top
Posted by john fellman at 6:46 PM

Dude, would it kill you to provide a link? I had to Google Charlie Hoffman all by myself. Come on, throw us a bone!

I had no idea I was forcing you to google all by yourself. I hope you're alright. I'll provide links in the future - just for you.

Thanks, John. (The other benefit is that it will help increase the visibility of your blog by linking to other sites that Google is already indexing.)

Fortunately, I warmed up properly before Googling, and I was unharmed.


Hey I know this is off topic but I was wondering if you knew of any widgets I could add to my blog that automatically tweet my newest twitter updates. I've been looking for a plug-in like this for quite some time and was hoping maybe you would have some experience with something like this. Please let me know if you run into anything. I truly enjoy reading your blog and I look forward to your new updates. gmail sign in